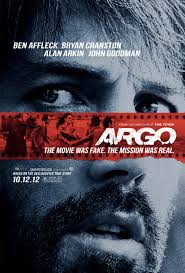 I was baffled when this straight-forward thriller toppled the Oscar juggernaut that was Lincoln, but it makes perfect sense when you consider whom Argo portrays as its hero. Based on the true story of a rescue mission during the Iranian Hostage Crisis, the film draws heavily upon Hollywood politics and storytelling.

The plot revolves around a joint United States/Canadian mission to rescue six Americans who ditched their own embassy and found sanctuary with the Canadian ambassador. Despairing for a plan, CIA operative Tony Mendez proposes a radical option: concoct a fake movie and bring home the six workers by disguising them as Canadian film crew.

Argo contains all the thrills (and intellectual substance) of a theme park ride, endlessly ratcheting up its momentum. Ben Affleck has cited Alan J. Pakula’s work as a key influence on his approach, and you see it in the suspenseful camerawork—quick pans and tracking shots abound. Despite the complicated political motivations, Affleck and company ensure we always know what’s going on and where we’re headed. It seldom lets up in terms of excitement–the threat of danger looms in very frame.

Yet for all its insistence on factual accuracy, Argo always feels like a Hollywood production, with its obvious exaggerations and flat-out fabrications. Chris Terrio’s screenplay, while clever, is rife with dialogue that artlessly fills in exposition, as if to say “Did you get that?” We also lack an interesting lead performance from Affleck. There’ a fine line between understated and boring, and Affleck leans more to the latter side. Still, at least we have entertaining moments from Alan Arkin and John Goodman (though far too few).

If you can suspend your disbelief enough, you’ll be rewarded with a white-knuckle adventure that clips along even when seemingly idle. Say what you will about Affleck, but he knows how to craft a compelling film. (I just don’t know if I take any of them seriously.)