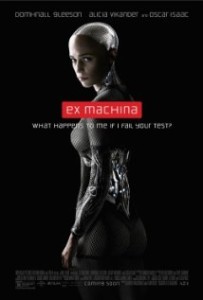 This may be Garland’s directorial debut, but he’s been kicking around the film industry for a while as a screenwriter, mostly for Danny Boyle’s films.  He also wrote the screenplay for the criminally underrated Dredd, a low budget action film more fun than the last spate of Marvel films combined.  But his first feature has tapped into utterly new territory.

The range of possible interpretations makes Ex Machina exceedingly difficult to discuss, but delightful to watch.  There’s a great mystery at the heart of the film that rewards our fascination, not just in what happens but why it happens.  Suffice to say, writer/director Alex Garland has crafted a science fiction film that belongs in the same conversation with Spike Jonze’s Her.  However, Ex Machina presents an artificial intelligence that also possesses a (mostly) human form…a variable which complicates and enriches the proceedings.

Yet it all starts simply enough.  Programmer Caleb Smith (Domhnall Gleeson) has just won a contest to spend a week with the eccentric CEO of “Bluebook” (a Google company of sorts) in the project opportunity of a lifetime.  So Caleb is introduced to Nathan (Oscar Isaac), the CEO, and subsequently “Ava” (Alicia Vikander), a robotic A.I.

Nathan tasks Caleb with being the human component in a Turing test:  if the human being can’t distinguish the computer from a fellow human being, the test is deemed a success.  Ordinarily, a Turing test would hide the human subject from his computer counterpart.  Not so here; Nathan has intentionally revealed the robot to Caleb.  With human looking face, hands, and feet, and robotic everything else, Ava nonetheless makes a convincing human facsimile.   So confident is Nathan in his invention, he believes Caleb will eventually mistake Ava for human even as his eyes tell him otherwise.

But it’s not just about appearances; Ava betrays not inconsiderable sarcasm, intelligence, and desires.  She’s not happy when Caleb can’t give her a straight answer about whether she’ll be turned off if she fails the test.  “Why is it up to anyone?” she queries, a reasonable question for an entity interested in self preservation.

Soon Caleb finds himself falling in love with Ava (or so it seems).  There’s certainly fragile vulberability to Alicia Vikander’s performance, but each move feels so calculated as to call into question her true intentions.  We can’t tell if her pleas for liberation are a lure for Caleb’s hopeless romanticism or genuine attempts at human connection.

And if Ava seems untrustworthy…Nathan is a total wild card.  Oscar Isaac has the time of his life playing the reclusive genius who can start a random dance party on a whim and make it seem like part of his ultimate plan.  You get the sense Nathan has been attempting to hone natural human interaction, making him seem socially awkward, but always cognizant of Caleb’s baffled responses.  Nathan’s whole being may be a conduit for further advances in technology.

So…can Nathan be trusted?  Can Ava? Is Caleb being totally honest with them? Who’s testing whom? The mystery deepens as Garland presents odd tableaus of natural and artificial, echoed in a wonderfully creepy setting that evokes techno-chic with rustic touches.  Add to that a liberal dose of body horror as characters embrace or challenge their identities.  It’s a nightmare version of the future where technology and humanity have been subsumed into one another.

And there’s a voyeuristic feel to Garland’s images, as his characters constantly watch each other on screens and through glass.  So prevalent is that voyeurism that you find yourself attempting to track whose eyes we’re watching from with every new shot.  On top of that, Garland skillfully interweaves imagined scenarios with actual ones, as fantasy and reality intertwine and overlap.  This cross cutting will make you second guess a character’s motivation even when you thought you had them pegged.

Certainly the film hearkens back to the structures of film noirs, complete with a femme fatale of sorts.  But Garland is also interrogating and improving upon those tropes.  If the film is told very much from the male gaze (in this case, male characters looking at female bodied machines), it’s done in a way that makes us question what we’re seeing…and subsequently, what we’re not seeing.

By its very nature, the film is cold to the touch.  This may turn off some viewers, and perhaps kept me from fully embracing this film with all its insight into human and robot relations.  It might also be that Caleb never transcends the archetype of the perpetual loser.  Gleeson does admirable work here, but I can’t help but be fearful that he’s being typecast as a lovable shlub (see also: About Time and Frank).  My investment in the film came more from its ideas than its protagonist per se.

Quibbles, I must say.  This is a superior piece of filmmaking by any standard, and easily the most entrancing portrayal of A.I. on screen.  Like all great sci–fi, it interrogates our present as much as our future.