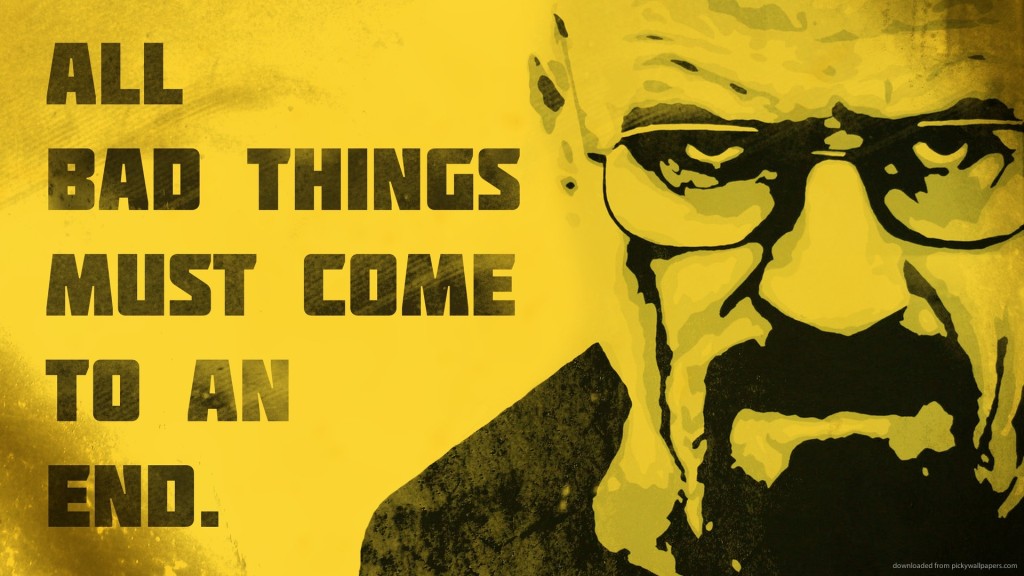 Okay, let’s address this up front: there’s a good chance that I’m missing one of your favorite scenes on my own list. If you’ve seen this landmark series, you know it’s an embarrassment of iconic moments that work as well on their own as they do as part of the entire story. Bottom line: it’s simply impossible for me to include them all.

As such, I’ve narrowed these scenes down to the ones that struck me most profoundly. Sometimes they’re linchpins, iconic moments that define the series in all its grimy glory. Other times they’re quieter moments, defined more by their implications than by fireworks. However big or small, I hope to pinpoint key decisions in the acting, writing, and direction that have solidified Breaking Bad as a classic of the small screen.

I’ve started with a few honorable mentions before getting into the nitty gritty. The scenes are ordered chronologically rather than by preference. I’m also issuing a firm SPOILER ALERT here, because to describe this show, the devil is in the details. 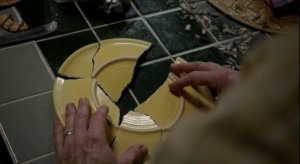 Vince Gilligan hit us hard and fast in this third episode, when Walter learns his heart-to-heart with Domingo “Krazy-8” Molina was for naught. The key to this scene is the pacing; Walt takes the time to piece the plate together, searches the trash can for any shards he’s missed, and walks agonizing slow down the stairs, anything to postpone his inevitable confrontation. Walt’s desperation becomes ours as we realize he will need to kill Krazy-8 after all, just after forming a real rapport with the captive drug dealer. A new weariness sets in on Walt, one that will inform his negotiations from here on out. No one is trustworthy. Not in this business. The descent has begun. 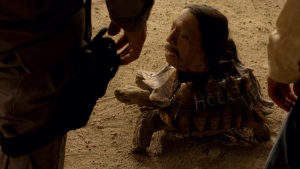 This scene is brilliant not just for how it upends our expectations, but how it forces us to reevaluate the enemy. The head of DEA snitch Tortuga on an actual tortuga would usually be a scene clincher…until it explodes, proving even the experienced guys (the El Paso DEA and the Federales) don’t know what they’re dealing with. One second they’re ribbing Hank the rookie with some gallows humor (“You act like you never saw a severed human head on a tortoise before!”), the next, they’re wailing in shock and agony on the ground. In one swift burst of violence, the power structure of this region has revealed itself. The aftermath of the explosion is just as eerily terrifying as the build-up, as Hank numbly ties a tourniquet around his companion’s bloody leg stump. As scary as the Juarez cartel is throughout the series, I’d argue they’re never more terrifying than in this scene, disembodied but diabolical. 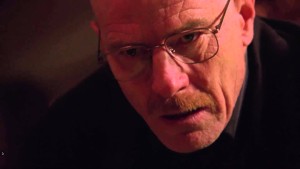 If the Krazy-8 situation proved Walt was capable of killing, the death of Jane Margolis proved he was capable of killing his conscience. There’s no dialogue in the sequence; we know what Walter stands to gain from Jane out of the way, so his initial hesitation to prevent Jane’s suffocation might not come as a surprise. It’s his commitment to negligible homicide that shocks and wrecks us. Director Colin Bucksey wisely zooms in on Bryan Cranston’s face, which shifts from stone-faced acceptance to abject horror at what he’s allowing, and everything in between. While Walter doesn’t wield a weapon or order a lackey to do his dirty work in this sequence, he does prove he’s not drawing a line at human life for his own ends. 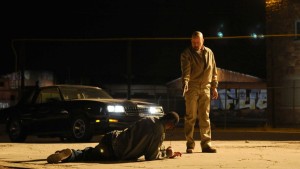 Here’s the scene where Walt takes Mike’s advice to heart about “no more half measures”…just not in the way Mike anticipated. As Jesse walks slowly but purposely toward the drug dealers who shot Combo, this nearly unbearable scene ratchets up the tension with thrumming music, jarring editing, and eerie yellow lighting. But what appears to be Jesse’s final moment becomes unexpected salvation. The sight of the dealers’ bodies turning into rag dolls under the Aztek’s screaming wheels, along with Jesse’s appalled expression, reveal Walter as a man who is capable of anything when love is on the line. There’s even the great little touch of Walt scrambling to pick up a gun before one wounded dealer can crawl lamely toward it. Director Adam Bernstein encapsulates Walt’s monomania in a slow close-up as he utters that chilling imperative to Jesse. 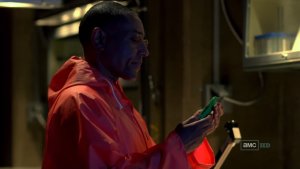 Oh, Gus Fring. I cherish every moment he’s onscreen, and this one especially. Like the best moments in Breaking Bad, patience defines this scene, as Gus methodically dons a clean-up suit and retrieves a utility knife from a drawer. As good as Bryan Cranston is here, ever the blubberer (I especially love the way he pauses when he sees the blade out), Giancarlo Esposito owns the scene without ever uttering a word. The way he circles Walt and Jesse, the feigned considerations for Walter’s rant, and the sudden lunge at an unexpected victim show how carefully thought out Gus’s “message” is for his meth cooks. The act of violence is beautifully and terrifyingly evoked, as Gus wrestles to hold Victor upright for Walt and Jesse to see. Kudos to Jeremiah Bitsui, because I still haven’t gotten the sound of Victor’s gurgling breaths out of my head to this day. 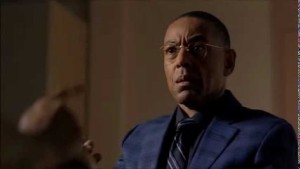 As disappointed as I was to see Gus exit the series, I couldn’t have asked for a better sendoff. Gus has always been smart, but Walter knows his Achilles heel: a personal grudge against Hector Salamanca. Giancarlo Esposito’s face in this scene hints at far graver wounds than his taunting of Hector might indicate. There’s something really funny about how helpless and vulnerable Hector looks, avoiding Gus’s glare like a schoolboy who’s ashamed to admit a transgression. Close-ups of Mark Margolis and Esposito heighten the dark comedy, with Hector’s demonic fury providing hilarious counterbalance to Gus’s slow realization of Walter’s plot. Thanks to great special effects work, an innocuous nursing home becomes a warzone in an instant. And the final shot of Gus, straightening his tie, half of his face blown away…it’s the essence of Gustavo Fring distilled in one indelible image. 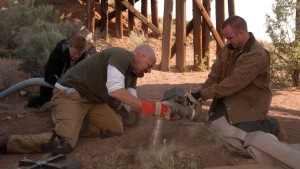 With all the character-based drama that Breaking Bad offers, it also manages one of the most riveting heist scenes ever put to television. Despite the meticulous preparation, the scene proves no plan is immune to external forces. It’s thrilling to watch these guys put their plan into motion, and at first everything goes swimmingly. But as director George Mastras slowly heightens the suspense, the editing becomes more frantic and the stakes tighter, as when an unexpected “Good Samaritan” shows up to potentially ruin their efforts. Soon you realize all involved parties are in over their heads, best defined by Jesse lying ramrod straight beneath the moving train’s undercarriage. And in classic Breaking Bad style, their eventual success is swiftly undone by an unforeseen interloper. 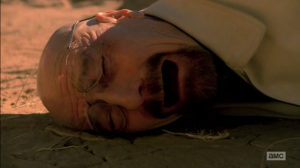 Hank’s death at the hands of Jack Welker may not be the first tragic death in the series, but it is the most crippling one for Walter: undeniable proof that Walt’s lifestyle has finally hit him where it hurts. It’s amazing seeing the peace that comes over Hank’s face as he accepts his fate, all the more tragic as Walter believes he can barter a way out for his brother-in-law. “Walter, you’re the smartest guy I ever met, but you’re too stupid to see…he made up his mind ten minutes ago,” Hank says, and Walt is speechless, silently denying the inevitable. Director Rian Johnson wisely spares us from Hank’s kill shot, but the aftermath says it all. The sound cuts out except for the wind, and Walt’s face mimics Ozymandias of the Shelley poem. It was a good run, Walter, but your choices have finally caught up with you.

9. Knife-Fight in the White Residence 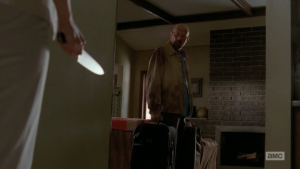 I’ve ordered these scenes chronologically, but this one is hands-down my favorite. It’s the ultimate rebuttal of Walter’s ready excuse for his terrible, terrible deeds. I love the way Rian Johnson foregrounds the large kitchen knife as Skyler slowly goes to retrieve it from the block, as if in a daze. We get a real sense of Walt’s obliviousness as he chooses not to take Skyler seriously, leading to his shock when she swings the knife at him. As they struggle for the weapon, Johnson’s camera follows them methodically; at one point the knife stabs frantically at the lens as the Whites wrestle for control. The culminating moment, with Walter screaming “What the hell is wrong with you? We’re a FAMILY!”, encapsulates the true depth of his delusions. But as he lamely echoes “We’re a family,” his wife and son cowering on the floor, his delusions come crashing down. And with it, any hope of Walt’s redemption. 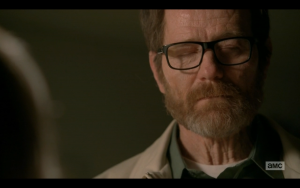 This scene is marked by little to no action, but by a man coming to terms with who he is. “I did it for me,” he says quietly, and Anna Gunn’s face registers true surprise with expert subtlety. “I enjoyed it. I was good at it,” Walt says, in forceful, declarative bullet points from Gilligan’s script. Walt takes the time to savor his words, and the restrained direction from Vince Gilligan lets his actors take their time in this scene. While nothing Walt says can undo the wake of terror he leaves behind, he can at least lift a burden through his honesty, ultimately helping his family to heal. Yes, wiping out Jack’s gang in one fell swoop is satisfying, for sure. But this earlier moment allows another kind of catharsis, with nary a bullet to be seen.

Well, there it is, folks. I hope I’ve done justice to this amazing show, even as I realize I’m missing so many iconic moments. There were no easy choices, and I’m grateful for it.

And though I know none of them are reading, I really must offer my gratitude to Vince Gilligan and his entire team for this great show. I wish them all long careers in the entertainment industry. We should be so lucky.