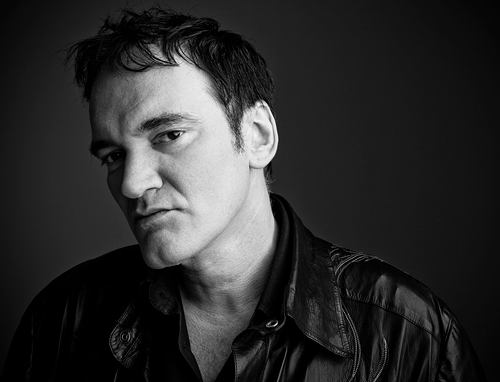 Tarantino may be the most divisive director I’ve covered in this series. I’ll admit, I thought I had him pegged, back when I first saw Inglourious Basterds in 2009. “Undeveloped characters, fantasy revenge, interminable conversations,” I surmised. As you’ll see, my opinion on that film has changed rather drastically. Yet I think my original opinion sums up much of the derision toward his work, especially from Kill Bill onward.

Champions of Tarantino speak of his brilliant subversion of genre, and the culturally savvy commentary underlying his stylistic flourishes. His critics, on the other hand, point out his excesses, while bemoaning his penchants for violence and profanity. In all honesty I think both views have some merit.

I mention these things because while I consider myself a fan of Tarantino, I do see where the critics are coming from. Hell, I used to be one of them. But while his style may threaten to overwhelm substance, I find his best work showcases the two working in conjunction.

As with my auteur rankings of the Coen Brothers, Martin Scorsese, David Lynch, and Hayao Miyazaki, I have included only the feature films where Tarantino has directorial credit. I’ve excluded films where Tarantino only directs a segment (Four Rooms, Sin City) as well as partially extant films (My Best Friend’s Birthday). 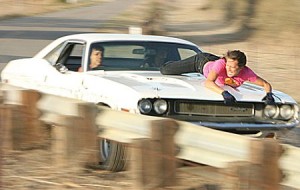 Tarantino himself calls it his weakest film, but that doesn’t mean it’s not fun. It’s the director’s version of a slasher movie, with the knife murderer replaced by a stunt driver with a fetish for high speed thrills. That’s an intriguing concept, weakened by relentless conversations that seem circuitous even by Tarantino standards. Still, the second half of the film improves mightily on the first, with Tarantino filming one of the greatest car chases in film history (all whirring blacktop and death-defying stunts). Kurt Russell has real charm as the killer, as well as the gameness to be badly emasculated. Tarantino cleverly subverts genre conventions in this grindhouse tribute, but it suffers from its general lack of ambition. 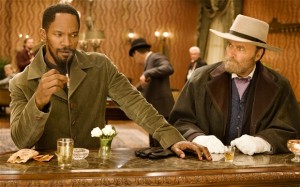 I’ve placed this film low, but that only speaks to the quality of Tarantino’s output. It’s been billed as a Southern revenge tale, though it actually comes closer to a caper film, with Jamie Foxx’s Django and Christoph Waltz’s Dr. King Schultz looking to outwit Leonardo DiCaprio’s Calvin Candie. In fact, Tarantino rather brilliantly derides any lingering romanticism associated with the antebellum South, likening those who profited from slavery to perpetrators of torture and murder. Even when the film indulges in graphic shootouts, Tarantino brings us back to cold, undeniable reality with a sinister monologue from Samuel L. Jackson. It’s a shame the film wastes the talented Kerry Washington as Django’s wife, or pushes its vengeance angle toward a problematically cathartic conclusion. 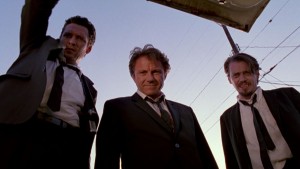 Tarantino’s gritty film debut still holds up remarkably well, despite having aged a bit. This nonlinear heist film introduces many of the hallmarks that would define Tarantino in his career (life-or-death role playing, shocking violence, referential dialogue) and benefits greatly from raw, energetic acting from Tim Roth, Harvey Keitel, and Steve Buscemi. The real joy of the film comes from the clashing personalities, and a rather ingenious bit of dramatic irony that ultimately leads to tragedy. All that said, the movie almost assuredly feels like a first film, and I can’t help but notice the seams poking through (particularly in the shabby production values). It’s still a blast, and harbinger of things to come. 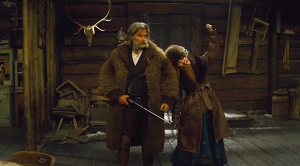 Make no mistake; Tarantino’s latest will not win over any haters. Taking the form of a claustrophobic whodunit, the film introduces a rogue’s gallery of miscreants seeking solace from a winter storm in 1880s Wyoming. While certainly echoing sociopolitical themes from Django Unchained, Tarantino shows real interest in exploring how biases color and shape our outlaws’ murderous intentions…but also how it makes them susceptible to manipulation. Boasting superlative work from a cast that includes Kurt Russell, Tim Roth, Samuel L. Jackson, and Jennifer Jason Leigh, the film pulls no punches, utilizing the deep focus possibilities of its 70mm cinematography to capture each bloody demise. I only wish Tarantino had left a little more to our imaginations, including one flashback that could have been excised entirely. 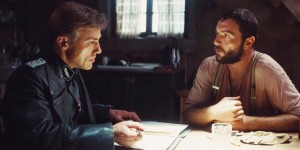 Like Django Unchained, it’s been misleadingly labelled historical revenge fantasy. In truth, Tarantino is undermining notions of nationalism or “master races”, lampooning Nazi leadership as power-seeking opportunists. And Christoph Waltz’s Hans Landa is the grandest opportunist of them all, handling scenes of deadly consequence with the lightest of touches. Tarantino holds perpetrators of unforgivable crimes accountable, while puncturing the artifice of Nazi ideology with the (literally) explosive power of cinema. This political film-treatise takes the form of show-stopping set-pieces, but in Tarantino’s film, as well as in warfare, there are never definitive winners. If the dramatis personae can sometimes feel like pawns as opposed to the instantly iconic characters of my top three films, it doesn’t mean they can’t be fun. 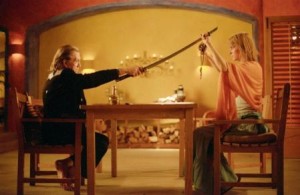 I’ve decided to include these two films as a whole, not only because they originated as one film, but also because I believe they work beautifully together. This is the Tarantino smorgasbord, where he lets his love for wuxia, kung fu, Yakuza, anime, and spaghetti westerns blaze brightly in bloody glory. And yes, while Tarantino loves his homages, he’s actually re-contextualizing these references within a more modern perspective. Vol. 2 sometimes gets a bad rap (it’s a lot talkier than Vol. 1, and somewhat more contemplative) but I think it’s the one that puts the saga in emotional focus, while giving Uma Thurman more dramatic muscles to flex. For all the bloodletting and blatant genre-worship, this is a story of woman and her complicated relationships with flesh and blood characters, not simply mini-bosses on the way to the big boss. If it’s not as intellectually deep as his other films, it’s certainly as emotionally deep. 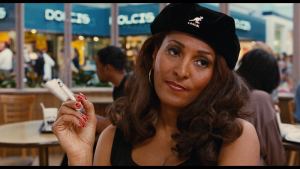 After the success of Pulp Fiction, Tarantino directed what may be the least “Tarantino film” he’s made. As his only movie based on existing material, his Elmore Leonard adaptation is more subdued, more patient than you might expect from a so-called purveyor of gore and exploitation. More fascinating than that, the title character is struggling as much with her lot in life as she is with the vicious gangster Ordell Robbie (played by Samuel L. Jackson in maybe his scariest role). There’s a complicated plot, with the dissatisfied Jackie trying to swindle both Robbie and the feds, but equally important are her conversations with an excellent Robert Forster, as they reckon with age and mortality. More realistic than any of Tarantino’s 2000s material, it earns its fittingly bittersweet ending. 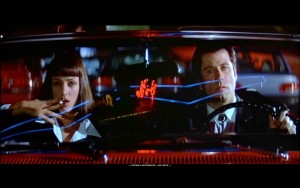 22 years later, the film that really put Tarantino on the map still holds up as his best. It’s his best balance of style and substance, homage and humanity. Many will remember iconic lines and iconic scenes, but the film has real cohesion as it applies the complexities of human nature to the conventions of crime fiction. The broken chronology perfectly encapsulates the tragedy, weaving together disparate stories while measuring if redemption is possible for these scurvy reprobates. Despite a twisting structure, Tarantino makes it all come together in a beautifully acted Mexican standoff, as Samuel L. Jackson’s Jules ponders his moral compass. Tarantino may love his tropes, but the nuances he explores within those tropes are pure Tarantino…and pure cinema.

It’s not clear exactly what the future holds for this controversial director, though he has claimed he’ll only make two more films before moving onto film criticism, novels, and possibly TV. Regardless of one’s thoughts on him, Quentin has yet to sell out. I doubt we’ll live to see that day. Thank the gods for that.