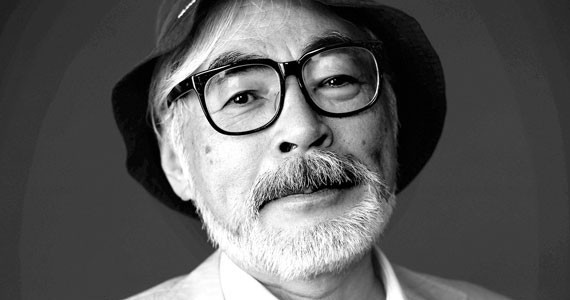 Miyazaki makes the kinds of movies one doesn’t just praise, but cherish. For my money, he’s not just the greatest anime filmmaker; he eclipses pioneers like Walt Disney as the finest director to work in animation, period.

Part of this may be the fact that Miyazaki has a firm grasp of filmmaking technique, revealed in his elegantly composed frames and lucid shot assembly. He’s perhaps matched only by Terrence Malick in his reverence for nature, but unlike Malick, he need not be fettered by live action reality. His compositions boast such imagination and depth of feeling that they can evoke entire histories or hidden divinities. His creations astonish, appall, dazzle, and shatter us as need be.

I’ve ranked these films according to my personal taste, but I should preface this list by definitively stating that Miyazaki has never made a bad film (in my opinion, of course). Some are better than others, true, but I don’t want to give the impression that the bottom films are somehow terrible by virtue of their ranking.

As with my rankings of the Coen Brothers, Martin Scorsese, and David Lynch, I have included only the feature films where Miyazaki has directorial credit. 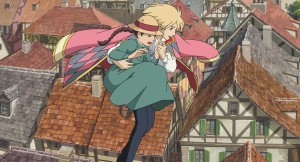 By virtue of this list, one of Miyazaki’s sumptuous artworks has to land in last place. Ostensibly, Howl’s has everything going for it: a plucky young woman on the cusp of adulthood, an enigmatic, tortured magician, and an incredible title edifice that looks like the steampunk version of Baba Yaga’s house. The fact that these elements are woven into a surrogate family drama adds to the wonder and bizarreness. And yet…Miyazaki’s powers can’t substitute for inconsistent storytelling. There’s so much detail to the world (and perhaps in the source material?) that Miyazaki overdoes the exposition, disrupting potentially interesting character moments. And the war that supposedly plagues the kingdom is so easily resolved we may wonder why it was there in the first place. Still, the film rewards with its rich relationships and inspired designs. 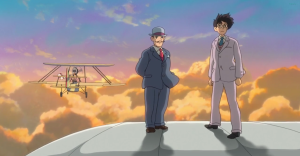 This film courted controversy (to say the least) due to its fictional interpretation of Jiro Horikoshi, the man who designed the infamous “Zero” planes used in Japanese suicide missions. Yet Miyazaki firmly acknowledges his subject’s complexity, presenting the contrast between Jiro’s beautiful creations and the horrific means to which they were put. He presents Jiro as visionary but distracted, immersing himself so completely in his work that his design sessions are rendered as fantastical flights. Jiro even imagines conversations with Italian engineer Giovanni Caproni, debating if the merits of technological innovation outweigh their destructive capabilities. I do wish Miyazaki had explored Jiro further (particularly his guilt), and the romance that springs up in the second half feels rather dissatisfying. But’s it’s still an impressive swan song, bittersweet to the fullest.

Gake no Ue no Ponyo 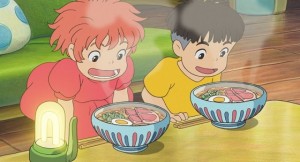 What Ponyo lacks in satisfying narrative conflict, it makes up for in character-based comedy and breathtaking animation. In some ways a retelling of The Little Mermaid but infused with Miyazaki’s phantasmagoria, it captures moments of grandeur and adorableness. It’s almost worth seeing just for Ponyo (literally a fish out of water!) as she tries to learn what it means to be human. Displaying Miyazaki’s talent for ocean animation, it’s a moving tribute to childhood, especially as Sosuke and Ponyo develop their relationship largely free of concerned adults. Consequences result, but the stakes are always low; I find myself remembering Ponyo’s obsession with ham more than the important decisions Sosuke must make to resolve the plot. No matter, I still find myself smiling in the end. 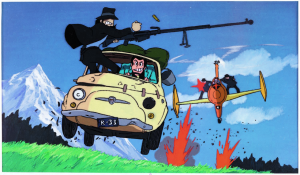 This probably would be the best James Bond film not starring James Bond, except that it’s better than just about every Bond film. Master thief Lupin has all the good looks and daring of Britain’s master spy, but also boasts a propensity for prankery and general goofiness. Miyazaki practically plays the action film for farce, with last-minute escapes and self-aware secondary characters (one even starts doing play-by-play of a deadly showdown, sports commentator style!). And because of the animated environment, the chases are much more thrilling, exaggerated for visceral and comedic effect. I’d never argue that this film treads deeper ground than the previous films I’ve listed, but it does pack a greater sense of momentum, and pure, euphoric fun in every frame.

Kaze no Tani no Naushika 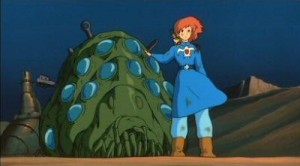 With his second feature, Miyazaki embarked on a far more ambitious track than Lupin III would have suggested. Circumstances have rarely been more dire than here, with a post-apocalyptic setting, mutant insects, and warring kingdoms. Through all the chaos rises Nausicaä, a heroine destined to broker peace between the human kingdoms and the savage earth. While Miyazaki perhaps pushes the Christ imagery a bit hard, he still makes us understand the enormous pressures put upon “chosen ones”, which comes through in Nausicaa’s tension with allies and adversaries alike. The omnipresent political and natural conflicts may have hinted at later, greater triumphs in the Miyazaki canon (most obviously in Princess Mononoke), but I’m amazed at how Miyazaki makes us care for insect/trilobite hybrids called Ohm, affording them the same reverence as all his astonishing creations. 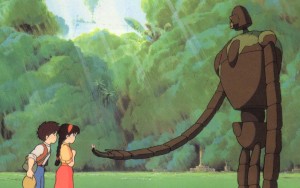 This story of a legendary flying city offers pleasures both simple and transcendent. Our heroes are Pazu and Sheeta, two young adventurers seeking Laputa while outwitting pirates and nefarious government operatives along the way. Miyazaki manages the impressive feat of fusing natural and artificial imgery, not least in the peaceful ecosystem on Laputa tended by skeletal automatons. He continually confounds our expectations, with imposing creatures made suddenly vulnerable and pirates turned unexpected allies (led by the pigtailed, pistol-toting Dola). But at its heart, the film is very much about the relationship between Sheeta and Pazu, two misfits surrounded by corruption and greed. The city may be their goal, and the adventure grand and rousing, but their destiny is ultimately tied to their love for one another. 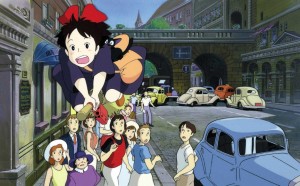 In Kiki, Miyazaki unlocks the potential of magic for a nuanced and vivid coming of age tale. A young witch aching to make it on her own, Kiki sets out to create a new life for herself in the city, utilizing her still-burgeoning powers to find work and settle down. Yet life is not easy as she may have guessed, and her enthusiasm doesn’t necessarily compensate for her lack of experience. The film is as much about the awkwardness of coming into your own as it is about succeeding through sheer moxie, and the wonderful array of characters, from fierce artist Ursula to sensitive doter Tombo, hone Kiki’s growing maturity. Miyazaki renders bold flight sequences with more crashing and clumsiness than any film with broom flying I can think of. On top of all that, Kiki’s cat Jiji functions beautifully as his own character and as a conscience for our young heroine. 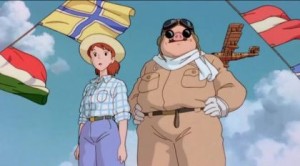 This oft-overlooked gem from the Miyazaki canon is probably the closest the director has come to making a Marx Brothers movie. Surly but gallant, the pilot of the title was once a brilliant WWI ace who now slums it out as a mercenary. Yet the film sees the “Crimson Pig” coming to terms with his own obsolescence; he’s fast becoming a relic amidst technological and social progress. In Miyazaki’s alternate history, young girls refuse to take their pirate captors seriously, and female engineers manage to impress even an experienced pilot liked Porco Rosso with their know-how. If that weren’t enough to skewer the patriarchy, Miyazaki depicts a “honorable” dogfight between two male pilots that eventually devolves into a farcical fistfight. By turns funny and charming, it’s both achingly nostalgic and remarkably progressive. 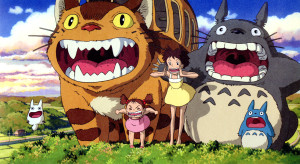 Here’s a film that bursts with joy, sadness, wonder, and trauma in less than 90 minutes. Less about plot than about specific character portraits, the film follows two young girls and their father who move to the countryside in order to be closer to their ill mother. Few films capture how simultaneously wondrous and terrifying life can seem as a child (or as an adult, for that matter). The landscapes are refreshingly pastoral, supplemented by larger-than-life characters who mystify yet reassure us every time they’re onscreen. Through their presence, Miyazaki subtly explores the uses and limitations of imagination to cope with the scourges of fate. The relationship between the sisters, and their collective experience with the forest spirits, leaves us satisfied emotionally and intellectually.

Sen to Chihiro no Kamikakushi 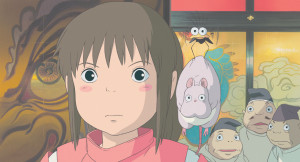 You might think Miyazaki’s most well-known film (especially to American audiences) risks being overhyped or overrated. Not so; Miyazaki filters a clever bildungsroman through Japanese folkloric sensibilities with masterful precision. Following a young girl named Chihiro, the film follows her quest to free herself from a fantastical spirit world. Watching this movie is enough to remind us that Miyazaki’s strength as a filmmaker owes as much to his conceptions as the animation itself. Each character seems to have life of its own, yet the director never sacrifices the surreality of Chihiro’s situation. Her journey into semi-adulthood contains both whimsy and drudgery, and both offer hard won rewards, new friends, and fresh perspectives. When Miyazaki pauses on Chihiro’s much matured face in profile, it’s remarkably well-earned. 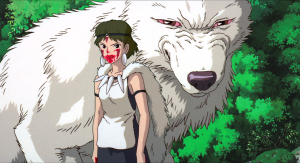 This one edges out Spirited Away for me…but only just. Princess Mononoke represents the largest canvas Miyazaki has ever worked upon (and likely ever will) and he fills it with complex characters and complex histories to boot. No film of Miyazaki’s so earnestly forces us to constantly realign our sympathies. The women of Irontown take charge of themselves under the reign of Lady Eboshi, but they turn out to be as greedy and power-hungry as their mistress. Similarly, the forest spirits with which they do battle want to protect their homesteads, but also bring old, uncompromising traditions with them. Miyazaki complements his political conflicts with landscapes that echo David Lean’s sweeping vistas, as well as a complicated relationship between our heroes Ashitaka and San, whose frustrations nearly boil over they struggle to keep the peace. In this film, Miyazaki never sacrifices intimacy for scale; he captures both simultaneously.

So stand my rankings at this time. But what does the future hold? Unfortunately, Miyazaki has officially announced his retirement from filmmaking (“for real this time”), which may mean we have the sum total of his work already available to us. I’ll be honest, the thought of no new Miyazaki films depresses me. Yet I realize his work goes beyond feature films, with a treasure trove of shorts still unseen by me. What’s more, his films are so rich in detail and warmth that we’ll never truly lose Miyazaki’s talent. I’m grateful for that.